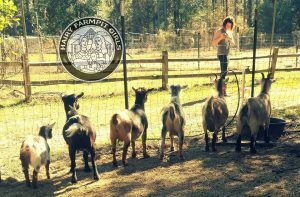 Life as a Hairy Farmpit Girl goat is pretty sweet. Our ladies (and occasional gentleman) are extremely spoiled and hilarious.  Each has her own personality and lists of likes and dislikes.  We raise 3 types of goats out here.  Our main goat is the Nigerian Dwarf goat.  Known for their small size and great milk ratio, they are our primary source of milk.  We have 3 pet pygmy goats that serve no purpose other than to crack us up with their insane pygmy personalities.  We also have one lamancha, Ani DiFragoat, who is a big, beautiful milking queen.  We are currently breeding lamanchas and nigerian dwarf goats to each other to make a smaller but more productive goat.

All of our goats have a retirement plan that includes care and love throughout their natural lives.  We do not eat or sell goats to anyone who would slaughter them.  They are like family to us and are the reason this whole farm operates.

We will introduce a few to you here!

The last of the mean girls and the hottest mess of the hot messes.  Basil (pronounced baaaay-sil) is the messiest of them all.  Basil is absolutely delusional in her breeding and size. She seems to think of herself as a show goat and has extra sass in her hips.  To keep her happy, we have to go along with the lies that she is a show goat and that she has perfectly fine feet and form.  (She has nothing.) 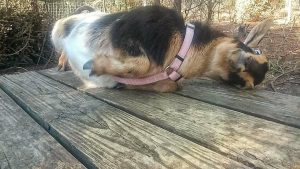 Basil is known her for insane ability to take any pictures. She always makes weird faces and is the most photogenic of any of our goats.  Basil has been really well behaved this year and it makes us worry.  Last year, she decided to start acting like a billy goat. She full force did everything Vincent does and claimed to have fathered half of the kids born this year as well as being both father and mother to her own kids.  Last year she took up nursing herself, which was very awkward to watch but was even more frustrating for us because she was drinking all of her own milk in order to impress the other ladies.   This year she is an angel. She is allowed to always be the first one milked and as a result, she stands perfectly still and is always the last out of the feed barn. 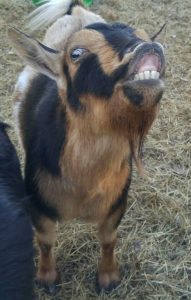 Some people think Basil has a black phallic symbol on her face and head.  Once you see it, you will never unsee it.  Basil says “so what, I told you I was a billy goat” when we confront her with her facial art. Basil is tiny but very butch. She sees Ani as a mountain she wants to climb and has a napoleon complex and we believe she honestly believes that she is the same size as Ani.  Basil is everyone’s favorite goat, simply for her bizarre antics that she has kicking at any given time. 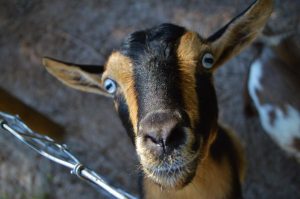 The Blurt Russell and Goatie Hawn

We added “The” to his name because Blurt has become such a celebrity here in South Georgia.   Blurt is the wethered, pygmy/nigerian dwarf son of Goatie Hawn.  He was bottle fed by us because Goatie is just not a good mother. 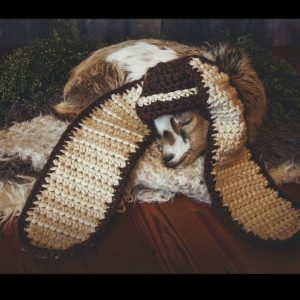 Goatie is one of our 2 pet pygmy goats.  She is a hot mess among hot messes.  If Goatie were a person, she would be a 16 year old girl with at least 7 facial piercings and a seemingly never ending stash of fruit flavored wine coolers that she stole.  She would teach you how to smoke cigarettes after school and would be expelled on a regular basis.  She has illegitimate children that were raised by their grandparents and have no idea she is their mother and not their sister. 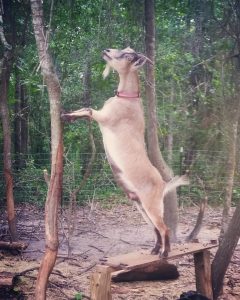 Goatie is Jen’s goat.  We each have one of the pygmies as our own personal pet.  Goatie and Jen are alike in so many ways. Neither has any interest in motherhood and Goatie starved and attempted to freeze her last baby (Blurt Russell) so earned the reputation of being the Casey Anthony of goat mamas. It just is never a good idea for her.  She is still sewing her wild oats (for nearly 3 years now) and partying up a storm. She is the most agile of all of our goats and is a climber.  She and Jen are also very petite but warriors and both a little stabby. Goatie is always showing off the fact she has horns to the other goats and isn’t afraid to take on Ani DiFragoat, who outweighs her by about 100 lbs.  Goatie is no fainting violet.  When she was born, she was the cutest baby but soon discovered where kidneys were on people. We would be sitting and all the sudden get shooting pains in our side because she always managed to baby horn us right in the kidney. It was so frequent that she earned the name “Kidney Crusher” and still has that reputation to this day.  She loves the name and is planning on getting it tattooed on her neck soon.  She is also a love goat and had a brief stint as a milk goat after disowning Blurt.  She actually got us through the winter with our milk needs, though due to her horrible mothering abilities, she will never be bred again, and therefore, will never be a milk goat again. 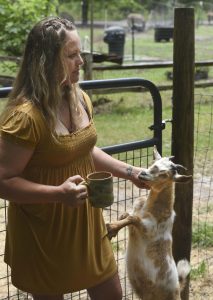 Raising goats is like being a principal at an all girl reform school.  The politics of the goat pasture rival that of the most cliquey high school around.  We have some new followers and have decided to re-introduce each goat, pig, donkey and the occassional chicken to y’all so you can get a little of the back story of what makes Hairy Farmpit Girls so popular in the first place. 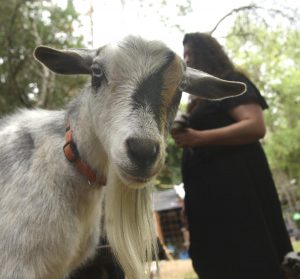 Introducing, Nae West as she is the top girl in the whole herd.  Nae is the queen of the mean girls.  The mean girls are Nae, Basil, Whoopi Goatberg and Goatie Hawn.  They are a tight clique and are all snobby to the others.  They would not let you eat lunch with them and they would make fun of your jeans, no matter how new or expensive they are.  You will never be in their circle unless you are born in.

This does not mean that they are the best bred goats around.  Nae is pretty nice when it comes to what makes a goat “good” but the others are a hot mess and were our first goats, back when we thought a goat was a goat and spending $500 on a goat was outlandish and ridiculous.  We are so attached to them all, though, that they will continue to live all their days here, making us laugh and eating the good hay.

Nae rules with an iron fist…I mean head.  She purposely picks on the outcast goats for no reason other than it makes her feel good about herself and lives to intimidate and scare Feta.  She also expresses happiness through moans.  These are the types of almost human sounding pleasure moans that make you feel a little embarrassed if someone is around.  When we fill the hay barn and let her go in to get the untouched peanut hay, she just moans and moans out of pleasure.  If there is a new food we want to try out, we give it to her first. If she says “ahhh, oh god, yes”, then we know it is a keeper for all the goats.  If she says nothing, we have to go back to the feed store.  Nae is a great milker. While she isn’t always the highest producer, she is consistent and milks for a long time. She also has my dream nipples.  I know…that sounds filthy, but some of the goats have teats that are too fat for a good, comfortable grip, or so small that it is like we are milking with one finger, but Nae has perfectly well shaped, easy grasped teats and she leaves her tyranny in the pasture when she comes to get milked, standing perfectly still the whole time. 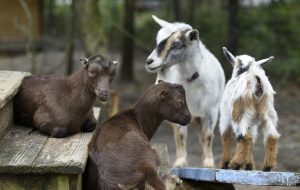 Nae is the mother to Lady Baa-Baa who we think we may keep.  Lady is having some issues with letting her guard down and has been acting a fool around people.  We get our daily cardio chasing her around in the evening to go to bed with the other babies.  She needs ritalin, therapy and manners classes if she is going to stay with us for the long haul. 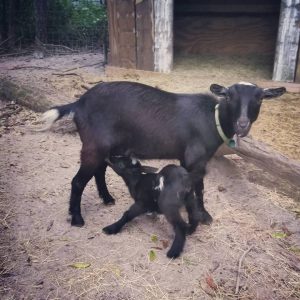 Next up in Hays of our Lives, Cudz Mackenzie.  Cudz is a spazz.  She is not in the mean girl club at all but is occassionally allowed to share the same oxygen as them.  She prefers to stick to her own daughters and Feta as she and Feta came from the same farm.  Cudz moved in with us because she was bad at her last farm.  She was running away and not letting anyone touch her and had earned the title of “Wild One” out there.  So we got her after her previous owner told us “Come get this damn goat, I have had enough of her.”.  Within 3 days, Cudz was eating out of our hands and was the friendliest goat around.  We have no idea why she was giving her previous owner such a hard time, but to this day we still send selfies with Cudz to her and laugh as Cudz kisses us, seemingly taunting Sally.

That being said, Cudz is a ding bat.  She can be afraid of wind but fine with a rabid pack of coyotes.  You can never predict what will scare her for that minute and what won’t make her blink an eye. She changes her phobias more often than we change our socks.  Cudz also hates getting her hair wet.  It makes her scream in terror but she doesn’t understand how to get out of the rain half the time so she just stands in the rain and screams at the top of her lungs.  Cudz only has one level of scream and that can be described as “Labor Scream”.  Whether she is excited about seeing a butterfly or having legitimate contractions, she sounds like she is in labor.  That being said, we don’t know what she sounds like when she is legitimately having a baby because she likes to wait until we are least expecting it and away to have her babies. She is the only goat that has had kids that we haven’t been there for and she has done it 2 times now.

Cudz is the mother to Halloumi Campbell and Felicity Hoofman.  Halloumi was our first GoatGram celebrity goat and many local people have met her around town or at the local Halloween festival where she went dressed up like a ballerina while Jen was dressed up like a cow.  We had lots of kids who thought we had a really cute dog.

Halloumi was an only child and she was born last September so grew up with no other babies around to play with.  As a result of that, she became a very serious goat and we have seen her play maybe 2 times. We joke around and tell each other that she has goals of being an accountant when she grows up and does calculus for fun. Since Cudz had her new baby this year, Felicity Hoofman, Halloumi has been feeling a little jealousy.  She has been used to nothing but Cudz’s unwavering attention for so long that she really kind of resents the new baby.  She cuddles with Cudz and keeps the new baby away any chance she gets.  And as for Felicity, well, she is Cudz’s exact clone.  Down to her coat and markings, she has Cudz’s unpredictable and flighty personality.  And as for Cudz’s labor pains scream, yup…that’s genetic.  Both Halloumi and Felicity have the same strong vocal chords and no ability to indoor voice.